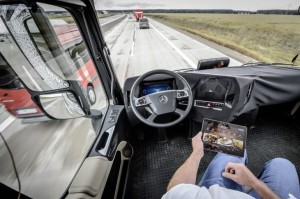 Daimler Trucks thinks a driverless big rig will be part of our future.

Daimler debuted its Future Truck 2025 recently in Germany. Using a “Highway Pilot” system, the prototype semi is capable of driving itself while hauling a full load at speeds exceeding 50 mph, according to the company.

Much of the focus on driverless vehicles spotlights passenger cars. However, there is nothing to suggest similar technologies couldn’t be applied to commercial trucks.

Potential benefits highlight safety systems that might reduce issues like drowsy driving. Bernhard said that an autonomous vehicle could allow truckers to take on new roles while still in the cab of a truck. “It will not only free them from having to perform monotonous tasks; it will also give them more time for tasks that were previously handled by office workers at shipping companies,” he said. “In other words, it will be possible for truckers to advance to new positions as transport managers, making truck driving a more attractive profession. Autonomous driving could thus help to resolve the shortage of truck drivers.” Google and several other U.S. manufacturers are in various levels of testing autonomous vehicles. Some expect these vehicles to be on U.S. roads within the next five to seven years; state and local governments are in the process of establishing the “rules of the road” for these vehicles. Right now, Mercedes seems to be focusing its energy on developing the truck for use in European Union countries. Source: www.yahoo.com/news